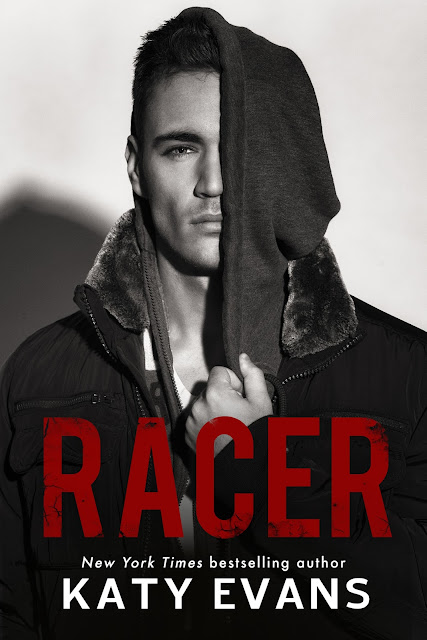 A bad boy with something to prove.
A woman with a mission.
The race of their lives.
The love of a lifetime.
I don’t think his parents expected him to live up to his name—Racer Tate—but once he felt the adrenaline rush behind the wheel, he was addicted.
He's the fastest, fiercest driver around.
Scouting new talent brings me to his doorstep...
but his smile sends me to my knees.
The sexy, mysterious Racer Tate is not the kind of man a girl like me falls for. He's secretive, reckless, elusive. But his proximity pushes me beyond reason, and his kiss....
This is our last chance to win, and he is our only hope. I'm supposed to watch him—make sure he doesn't get into trouble. But it's an impossible task. And now the one in heart wrenching, toe-curling, soul-crushing trouble is me. Because when your heart belongs to someone, their truths become your own, and their secrets become your salvation...or your curse.
He says he wants me. He says I'm the One. But he also thinks he'll break my heart, one piece at a time until it's gone.

I’m still reeling. While people approach him, he cuts a path straight to me, his gaze penetrating and target-like; making me want to bolt.

His lips do that little upward tilt they do that seems so sexy, and for a second, I feel like I’m lightheaded.

I gulp, and then feel mad at myself for acting like some idiot as fucking devil-Racer Tate reaches me, throws himself into a seat next to me, and turns to look at me expectantly with the most gorgeous grin on his face.

I don’t know what to say.

This guy has left me sort of speechless.

“So … ” I say, staring in the distance at his beat-up mustang, then at him.

“So … ” he says too, in his deep voice, his smile a little more wicked than it was two seconds ago. He glances at my mouth.

Why am I licking my lips?

It only made his eyes narrow and darken.

I open my mouth to speak, failing to find words. He smells like sweat and soap and shampoo, and I feel my traitorous nipples push up to my top again. Why do they do that when he’s around?

“This is illegal,” I state.

His voice is husky from exertion, and his eyes glint with laughter. “That’s why it’s fun.”

I look away from his eyes, trying to focus and clear my head. He leans over and peers into my face, his face shadowed by the moonlight and his jaw now carrying a little scruff. “Are we in agreement?” he presses.

“No.” I glare and shake my head, meeting his cocky gaze. “You’re reckless, Racer.”

His brows fly up in surprise. “And a bit of a liar too.”

“You crashed your car,” I say flippantly.

“You crashed my car,” he contradicts, amused.

I laugh, then scowl in his direction. “You crashed it more. I can’t believe you were making such a fuss about me crashing into you when it was just a little kiss—”

He leans in to peck my lips—fast but firmly. “That’s a kiss.”

I lose my breath.

He eases back, lips smiling as he comes to his feet and stretches his hand out to take me by the elbow and help me to my feet.

“Let’s get out of here.” He starts walking, leading the way.

“Anywhere I can get my hands on you.” 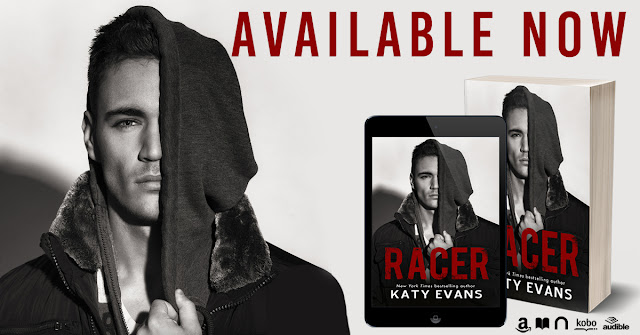 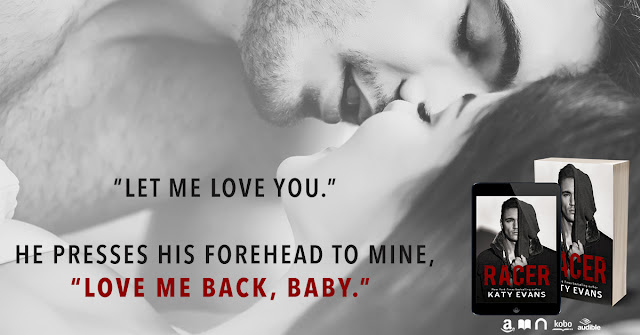 I couldn't put this book down. Racer is HOT, Intense, and sexy. The apple didn't fall far from the tree. Another amazing read from Katy Evans.

Katy Evans is a New York Times, USA Today, and Wall Street Journal bestselling author. Her debut REAL shot to the top of the bestselling lists in 2013 and since then 9 of her titles have been New York Times bestsellers. Her books have been translated into nearly a dozen languages across the world. 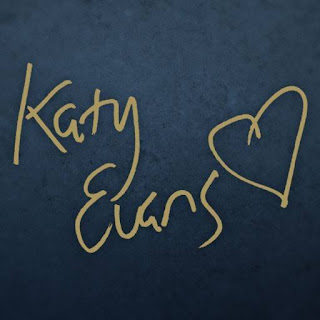 Connect with the Author: